The subject of today’s article is Five Signs That A Woman Is Attracted To You, that she likes you, that she wants you. Okay, so, if you see these signs, you’re not reading them correctly, then you might not be making a move and you might be losing chicks, and no one wants to lose girls, do they?

Play with their hair

Alright, so, gentlemen, here we go, sign number one that a woman is possibly attracted to you. Okay, so, probably the most obvious sign and a bit of a cliché, and if you don’t know this then, come on, open your eyes, right, is when women play with their hair and touch their hair. 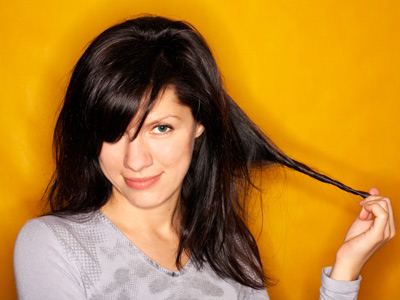 So, like, (in a high voice) “Alright, yeah, hm.” That kind of thing, and grooming themselves. So, hyper-accentuated grooming when you seem to turn up, alright? I’ve even seen guys walk past, there’s been a hot girl there, she’s naturally interested, and she turns away and quickly looks in the mirror, or gets her phone out and starts looking and doing her hair, or just subconsciously touching it up and playing with it. So it can be either when she sees him approaching, looking at her look in the mirror, or actually during the conversation, like I was doing just now, more little touches and nervous kind of adjustments to the hair, alright? This can also be done with the clothes as well, pulling them into shape, catching her reflection. What she’s doing is making sure she looks hot shit because she finds you attractive and she wants to be at her best. So, be aware that if she has no interest, then subconsciously she wouldn’t be thinking, mm, how’s my hair? So, usually, that is a sign that she’s feeling your vibes and maybe it’s time to make a move.

Okay, number two must be proximity, i.e., invading your personal space. Okay, this is especially so when the girl, you might be in a club or a social atmosphere, okay? If they tend to lean in and invade that kind of, you know, this sort of distance, then that’s far too close. As humans, we’re very used to having the realm of our personal space, and if someone invades it without permission or someone you don’t know, you’ll feel threatened instantly, okay? So, it’s a very unnatural thing to do, to move too close to another human being, and if you do invade that small gap of your personal space, you’re aware of that. You know, if someone does that to you when you’re on the train or the bus, you might think, yo, what’s this dude doing? Is he trying to pickpocket me? And if women are doing that to you as well, they’re aware of it, and they’re subconsciously and consciously doing it on purpose, to close the proximity between the two of you so that you’re nearer and body contact can ensue. So, if you think a lady’s invading your personal space, she’s probably not trying to start a fight. She’s probably not trying to steal your wallet, although she might be, be careful, alright? She apparently likes you, and that’s another sign you should pick up on and make a move.

Okay guys, so, the third sign that a woman may be attracted to you, that she’s feeling your vibes, has to be her general body language. Okay, so, if a girl’s standing like this, that means she’s closed off. Same with her posture. If she’s standing sideways, away from you, or talking to you from the side, or gets her phone out during the conversation, these are all very bad, the wrong body, these are all very, very bad body language traits. It shows she’s closed off, she’s not feeling you, she probably wants you to get the hell out of her face, and you haven’t got a chance, alright? So if that’s you, get out of here. But if it’s not you, and she’s doing the following, then she’s probably feeling you. If she’s very open, arms all over the place, more gestures, as I said earlier, touching the hair, lots of animated movements, that shows she’s feeling your vibe, she’s stepping up her energy levels to reciprocate that energy you’re giving her, and that’s because she feels some attraction between you. So, check for body language before you make a move. Open, happy, energetic body language nearly always symbolizes some rapport, which means go for it, Romeo; she could be yours. If she’s all shut off and not feeling it, then, Romeo, hold that thought because she’s not feeling you. Again, the way that woman makes eye contact is also very telling of her affections towards you. If she tends to maintain eye contact for a long time, sort of stare you into the eyes, look away and have wide-open eyes, that is a surefire sign she likes you, whereas if she looks away quickly, and whenever you try and make eye contact, she’ll break it, that is saying, whoa-ho, step away, and she’s not feeling you. So, doe-eyed, wide open eye contact. There’s also a slight turn of the head which girls trend to do when they’re finding a guy attractive, this kind of thing. It’s all very coy, and it’s almost seductive, right? So, if you’re getting those vibes with the eye contact, then she could be yours, buddy. Go for it.

Okay, so our next sign that a woman likes you have to be her responsiveness via text message, WhatsApp, over social media. I mean, if you don’t know this then, dude, sort your life out because you should do. If she’s giving you one word answers, if she’s taking an hour to reply or two days to respond, she’s saying, whoa, I don’t want to offend you but I’m not interested romantically, you’re in the friend zone, or even less than that, I’m just polite.

So, how can you tell if she is feeling you, alright, via text, social media? If she’s replying all the time, if she’s using lots of smiley faces, if she’s bringing something, another element, to the conversation, she’s asking your experience, she’s telling jokes, she’s investing in the conversation and she’s replying rapidly, that is a definite sign that she likes you. If she’s not doing all those things, then she’s probably saying, look, I don’t want to offend you but take a step back because very soon, I’m going to stop texting you back altogether.

Okay, so, finally, our fifth and final sign that a woman may be attracted to you, that she likes you, she thinks you’re a hot guy, has got to be general touching, alright? So, body contact, okay? Often guys will do this to women and women will be repelled. Oh God, he’s touching me, he’s trying to, you know, oh God, he’s trying to, he’s flirting with me, right? Men always do that because it’s usually men who are the ones pursuing women, alright? Our sociological gender roles say that we’re the guys trying it, trying to take them the whole time. If a woman does this, it’s very telling. When a man does it, much more apparent, he likes the girl. All guys like hot girls, it’s not hard, right? It’s not rocket science. Whereas when a woman likes you, she’s much coyer, so she does start to invade your personal space, when, if you tell a joke, she laughs, or if you tease her, she says, (in a high voice) “Oh, stop it,” and gives you a little punch or something like that. General body contact. Laughing when you touch her. If there’s something sad, she says, (in a high voice) “Oh,” and hugs you, or pats you on the shoulder. All these little things are not a coincidence, right? She doesn’t do that to a man she’s not attracted to. Men do it to women all the time. Women do it much more exclusively to men they find attractive and whomever they feel comfortable with. So, be aware of those signs. Is she making body contact in the situations which I have just been through? If she is, there’s a good chance that she could be attracted to you.

Okay, gents, so that was it, five signs that a woman may like you, she may be attracted to you. If you’re reading those signs correctly, then you too could have a hot date this Friday. Read next how to make relationship works!